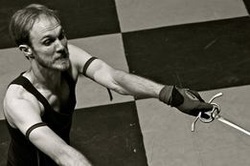 Steve Looten, Jr. recently choreographed a fight with 16 consecutive punto reversos in it, which was wildly acclaimed as a success.  Thank you postmodernism.

Steve started stage combat in outdoor drama where he killed white people, red people, and white red-coated people.  Building from tomahawks and rifles into the eight SAFD disciplines, he has studied this craft for over five years and worked on many incredible projects along the way.  Steve has had a hand in the Battles of Alamance, King's Mountain, Tippecanoe, Beruna, the Thames, and behind the Luxembourg - not to mention various skirmishes with pirates, feuding houses, and chess pieces.  His work as a performer and director has been seen with Horn In The West, Tecumseh!, Winter Opera St. Louis, The Little Theatre On The Square, Theatre In The Round, Six Elements Theatre, Gadfly Theatre Productions, the National Theatre For Children, and others.
Mike Lubke - Advanced Actor/Combatant
See coordinator page for bio
Aaron Preusse - Advanced Actor Combatant

Aaron is an Advanced Actor Combatant with the Society of American Fight Directors as well as receiving honors of Advanced Gold with Recommendation from the British Academy of Dramatic Combat. His fight choreography has been seen at Eat Street Players, Lyric Arts Company of Anoka, Concordia University of St. Paul, the 50Anniversary Celebration for the Guthrie Theater as well as many other theatres and films throughout the Midwest. As an actor Aaron has worked with Theatre de la Jeune Lune, Park Square Theatre, Six Elements Theatre Company, the Children’s Theatre Company, Berkeley Repertory, the Court Theatre, Idaho Shakespeare Festival, among many others.  Aaron is a graduate of the Dell’Arte International School of Physical Theatre and the London Academy of Music and Dramatic Art.  You can learn more about Aaron and his adventures at www.aaronpreusse.com. And as the great Mike Royko once said "Whether one eats a cat or not is a personal choice, and I don't want to sway anyone one way or another. But if you do, there is one obvious cooking tip: Always remember to remove the bell from the cat's collar before cooking." Happy fake fight y’all!
Amie Root - Advanced Actor/Combatant
Amie Root is a performer, fight director, choreographer, stage combat and movement instructor based out of Washington, DC. She graduated from the University of Wisconsin-Stevens Point with a BA in Drama, with a focus in physical theatre. She currently works as a teaching artist for the Tony award winning Shakespeare Theater Company, DC. She has taught movement and stage combat courses at University of Kentucky, University of Nebraska-Lincoln, Regent University-Virginia Beach, Kennesaw State University, as well as the three week National Stage Combat Workshop hosted by North Carolina School of the Arts and returned, for a third year, to the three week Central Illinois Stage Combat Workshop hosted by Eureka College. She is also guest artist faculty for California State University’s Summer Arts program hosted by CSU-Monterey Bay.
David P. Schneider - Advanced Actor/Combatant 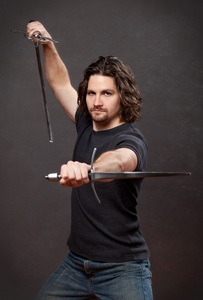 David P Schneider is a recognized Advanced Actor-Combatant with the Society of American Fight Directors and has been training since 2001. He has choreographed violence for numerous shows around town, including Park Square’s August: Osage County, Tedious Brief’s Bard Fiction, Hamlet at Theatre in the Round, ‘Tis Pity She’s a Whore for Classical Actor’s Ensemble, Cromulent Shakespeare’s Hamlet, Richard III and Hunchback of Notre Dame, Hot ‘N’ Throbbing and Teach Me Tonight with 20% Theatre, and several fights for the MN Renaissance Festival. He appeared as a sword fighter in MN Opera’s Romeo and Juliet, and has performed around the twin cities since 2003 with numerous companies including Theatre in the Round, Classical Actor’s Ensemble, Six Elements Theatre, Flaneur Productions, Green T Productions, and Off Leash Area.
Mike Speck - Advanced Actor/Combatant
See coordinator page for bio