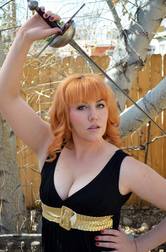 Emily Carvey is an Advanced Actor/Combatant with the SAFD based in Albuquerque, New Mexico. She is one of ….well….one AAC in her city. She has been involved with stage combat since she started at Columbia College in 2002. There, she took every class she could, certified in all 8 Weapons, and worked as a TA to John McFarland and David Wooley. After graduation she was cast as Maid Marion in the Bristol Renaissance Faire’s Fight Cast. Upon returning to Albuquerque she found a thriving theatre community with no fight presence. So she started a local group called They Fight Albuquerque. Through They Fight Albuquerque she has been able to offer combat training for the local theatre community. She works both as an actor and a fight director. Some of her favorite shows to choreograph were The Henry Project (The Vortex Theatre), Les Miserables (Albuquerque Little Theatre), Company (Musical Theatre Southwest), Tristan and Ysulet (The Aux Dog Theatre), The Wind and the Willows (The Aux Dogs Theatre), Noises Off! (Albuquerque Little Theatre), Terra Nova (The Vortex Theatre), Picnic (The Adobe Theatre), and Spamalot (Albuquerque Little Theatre). In addition to her certifications in the 8 SAFD weapons she is certified in Rapier and Cloak and Sword and Buckler with Distinction through Stage Combat Deutschland. She is also a brown belt in Kung Fu having studied at the Green Dragon Society in Chicago and currently practices at the Chinese Shaolin Center in Albuquerque.
Six Carolino 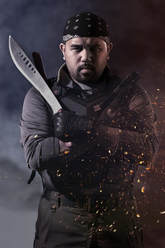 Jyo "Six" Carolino is a stunt coordinator and fight choreographer representing the Society of American Fight Directors and Dance Nocturnal Productions.  He grew up studying many forms of martial arts and self-defense shooting before developing a passion for theatrical violence.  His choreography has spanned almost a decade throughout the midsouth -- most notably in the award-winning film I AM SPARTAN and the short film series GAUNTLET RUN.  Six is also a freelance voice actor and motion capture specialist.  His voice can be heard on Chatterbox Audio Theatre, several audiobooks, a local radio station, and the Dance Nocturnal podcast Vic and Six Do the Universe!  You can check out his work on his website: www.thelegendarysix.com.
​
Jess Cashion 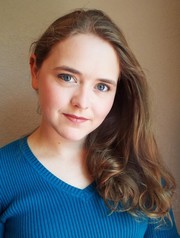 Jess is an 5'3" Advanced Actor Combatant with the Society of American Fight Directors and has been studying stage combat for over 3 years.  In her undergraduate studies, she earned two degrees, one in athletic training and one in theatre.  As of May 2017, Jess is a fresh graduate of Louisiana Tech University, where she had been earning her Master of Arts in Theatre.  While at Tech, she was able to participate in a multitude of opportunities.  Among them, she got to train with Mr. Mark Guinn in stage combat, work with him in his production of She Kills Monsters, and helped organize the 25th and 26th Annual Stage Combat Workshop at Louisiana Tech.  Jess had the opportunity to meet both Mikes and the Minnesota Fight Family 4 years ago and is thrilled to work with them once more to bring YOU a fun weekend in Minneapolis!
Tom Ringberg 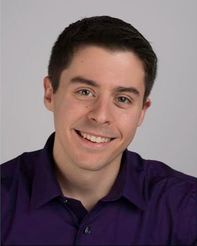 Tom Ringberg is a local actor, fight choreographer, and stunt performer in Minneapolis. Tom graduated from Augsburg College with a degree in Theatre with a focus on performance, directing, and stage combat. Lately Tom has been working as a stunt performer and coordinator for several small films projects around town. As well being the Fight Captain for several productions with the Minnesota Opera.
Matthew Perry Smith 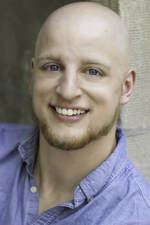 Matthew Perry Smith is an Advanced Actor Combatant with the SAFD, Apprentice Instructor with Dueling Arts International, Fight Director, and teacher based in Chicago, IL.  Matthew is a graduate of Indiana University of Pennsylvania, where he first started studying stage combat in 2013.  Matthew has appeared in fight shows at the Pennsylvania Renaissance Faire, as well as in All For One at Busch Gardens Williamsburg in 2016.  Some of his favorite Fight Direction credits include Joan of Arc, Moon Over Buffalo, and A Midsummer Night's Dream.